The inductors in all of the buck circuits act as filtering elements to smooth out the ripple and reduce peak currents. Since they must store energy for part of a cycle they usually have a discrete air gap(s) or a distributed air gap in the magnetic core path.

The switch mode power transformer in the Buck Circuit of Figure 1B couples energy from the input side (primary) to the output side (secondary).An ideal transformer does not store any energy and consequently does not provide any ripple filtering. The inductor does the ripple filtering. Ideally, a Buck circuit transformer couples energy without storing it (hence it meets the true definition of a transformer). The transformer does not need to do any ripple filtering. The transformer should have minimal air gap. The on time on the transistor (switch) controls how much energy is delivered to the capacitor hence it regulates the output voltage. Note that for the inductor circuit of Figure 1, the average capacitor voltage can never be more than the source voltage even for ideal circuit components. Real life voltage drops (diode, transistor, winding resistance) ensure that the average output voltage will be less than the source voltage. The transformer in Figure 1B remove this voltage limit and can also provide electrical isolation between input and output. 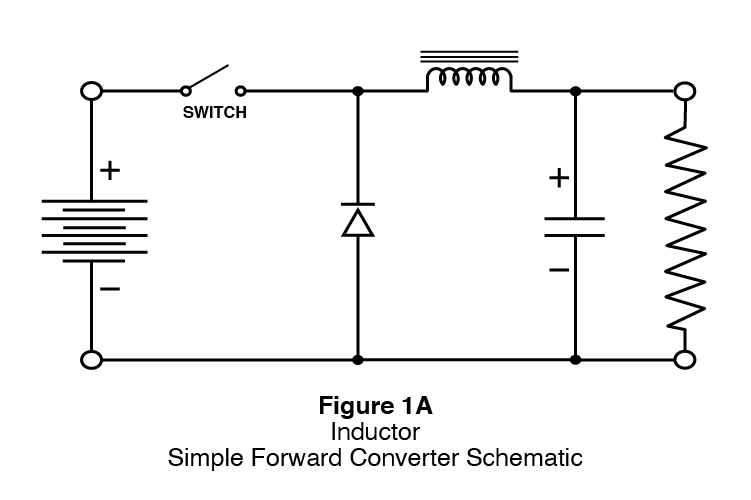 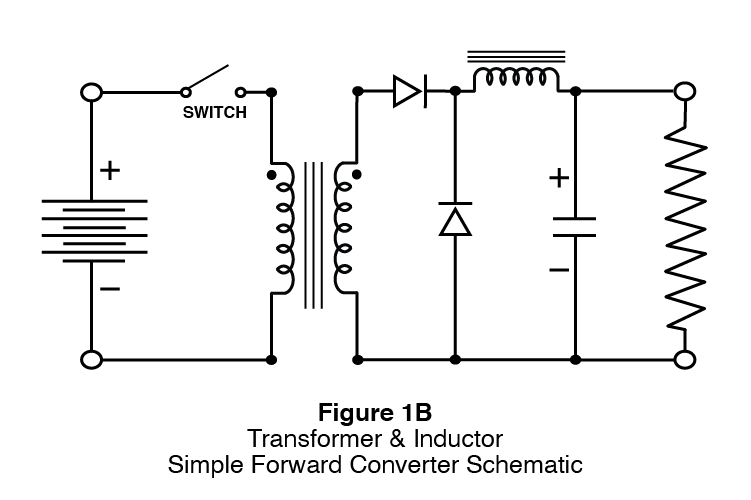 Unlike the Buck transformer, the flyback inductor, flyback transformer, boost inductor, and boost transformer intentionally store energy during the on time, or charging, portion of a cycle and then discharge energy during the off time portion. (Technically, since they intentionally store energy, the switch mode flyback and boost power transformers are not true transformers.) They usually have a discrete air gap(s) or a distributed gap in their core’s magnetic path. The transistor is turned on and current flows into the inductor or transformer (which has inductance). When the transistor is turned off, the input current that formed and maintained the core’s magnetic field become zero. The magnetic field collapses causing a voltage reversal to occur in the inductor or transformer. The collapsing magnetic field induces sufficiently high voltage (known as inductive kickback voltage) to discharge energy into the capacitor connected to the inductor or to the switch mode power transformer secondary. Inductive discharge into the capacitor continues until the magnetic field completely dissipates or power is restored to the input. Restoring the power starts the inductive charging cycle again. The use of inductive kickback permits the output voltages of the inductor circuits of Figures 2A and 3A to be either lower, equal, or greater than the input source voltage. A transformer step up is not needed to achieve voltages higher than the source voltage. Flyback transformers are usually preferred over flyback inductors. The appropriate turns ratio can optimize current levels. The transformer can provide voltage isolation between input and output, and removes a polarity restriction that comes with a flyback inductor design. 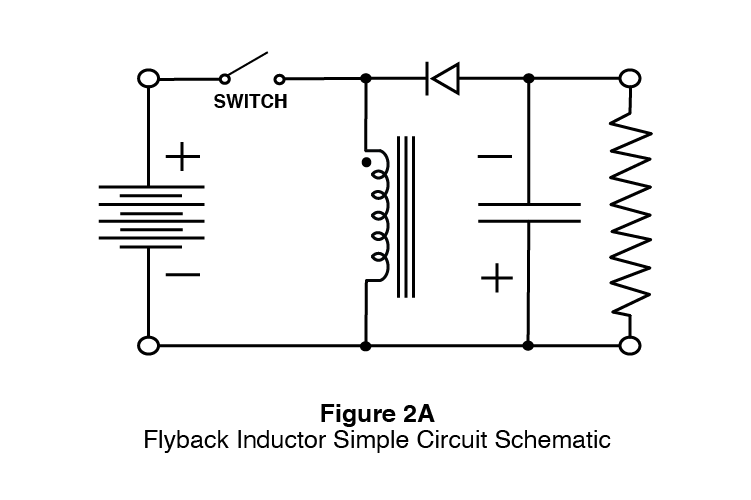 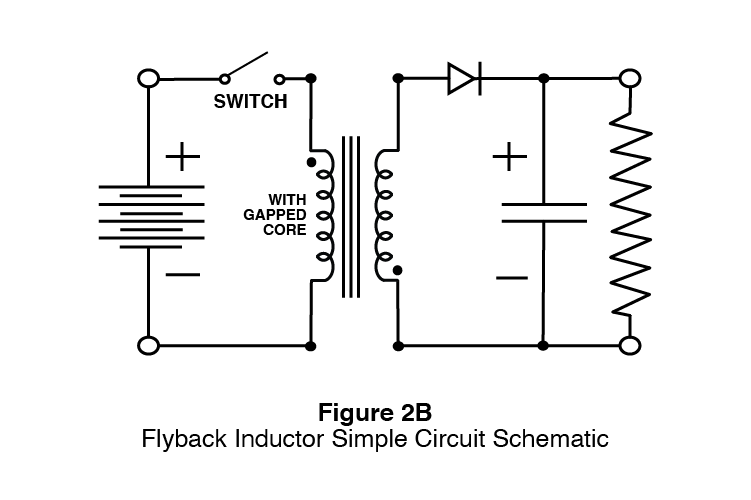 Few designers are aware of the boost transformer circuit shown in Figure 3B because the circuit is not very practical. With only half-wave rectification it is either a forward (Buck) converter transformer application or a flyback transformer application depending on choice of polarity. Full wave rectification, as shown, permits it to duplicate the boost inductor actions discussed in the prior paragraph; both storing energy and passing through energy (by transformer coupling like a Buck transformer) during the charging portion of a cycle if the secondary capacitor voltage is sufficiently low. It acts likes a flyback transformer during the discharging portion of the cycle. It is rarely used with the full wave rectification as shown. It has seen some limited use as modified in the circuit shown in Figure 3C. The transformer has two secondary windings. One is used as a Forward (Buck) converter. The other is used as a flyback. It effectively divides the full-wave rectification into two half-wave applications. A more common boost inductor application is shown in Figure 5. A boost inductor is used with a push-pull (Buck) transformer. High power power supplies might use this type of circuit. In this application both switches are not open at the same time. Both switches are closed to charge the inductor, otherwise the switches are alternated on and off with one closed and one open.

In comparing the boost with the flyback, an interesting characteristic to consider is the polarity reversal of the output capacitor due to the placement of the circuit components. Compare the circuits of Figures 2A and 3A. The diode in the fly back circuit, Figure 2A, completely blocks direct flow of current from the input source to the capacitor regardless of the capacitor’s voltage value. The capacitor can only be charged by the inductive kickback. The diode in the boost circuit, Figure 3A, permits current flow from the input source to the capacitor without the use of inductive kickback if the capacitor voltage is sufficiently low. Consequently it both stores energy and passes through energy during the charging portion of a cycle. Pass through current flow stops whenever the capacitor voltage approaches the value of the source voltage minus the diode voltage drop. (Further increase requires the inductive kickback voltage.) This may be a desirable feature for rapid power supply startup. 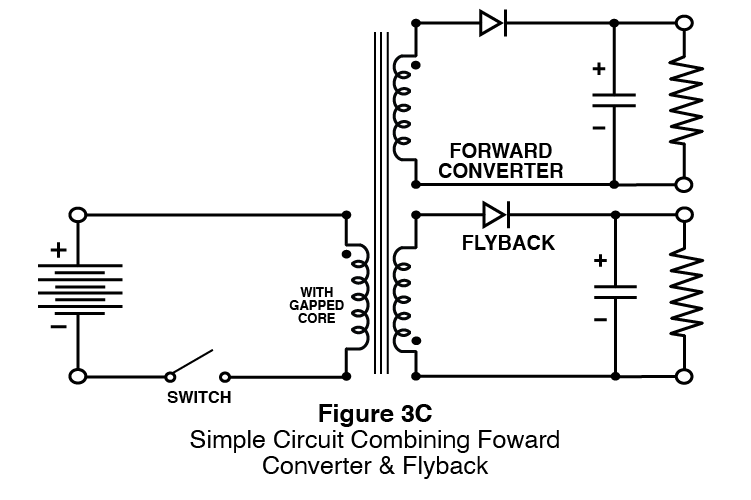